A trip to remember

As you can see from the header we are right now in Las Palmas that is the capital of the Canary Islands. The place is big and feels very industrial but you can find a couple of nice places if you look for them.  The marina here in Las Palmas Is packed with boats that are participating in the ARC- The Atlantic Rally for Cruisers.

The “race” has it´s start here in Las Palmas on the 10th of November and goes all the way over the Atlantic to Sant Lucia in the Caribbean. 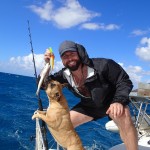 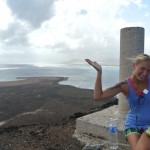 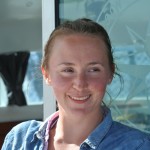 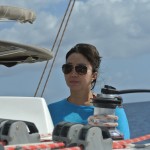 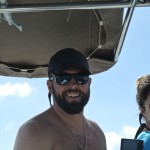 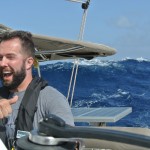 The American couple (Seth and Mickey) that hocked up with us on Lanzarote a week ago left the boat yesterday and Gosia from Poland that have been sailing with us from Gibraltar did the same this morning so we are all alone again.

Seth and Mickey that had not been on a sailing-boat before was in for a big treat, rough sea together with big waves will make any holiday unforgettable.

We started of with a short 4 hours trip to the south part of Lanzarote and it turned out that Seth was a really fast learner. It took him an hour or so until he by himself maneuvered the boat in speeds up to 9 knots, I find that pretty impressive.

A couple of barbecues later we set sail down to Fuerteventura where we checked out an old volcano island called Isla de Lobos. The place was pretty cool with it´s moon like landscape and clear waters.

It turned out that the island was natural reserve park and the ranger who worked there weren’t to impressed when Seth and me went “bananas” with the harpoon. Just after Seth’s first kill this park ranger shouted something at us that sounded pretty close to the words- CALL and POLICE so we made the decision to put an end to our fishing expedition and went back to the boat.

This guy Seth is totally out of luck when it comes to fishing, a couple of hours before the “ranger incident” he by accident (we all hope) managed to get Vera on the hook. We were all a bit surprised to see Vera with a 20 cm fishing lure hooked in her mouth.  We where lucky that Vera is one of the coolest dogs on the planet and that she didn’t panic over the fact that two guys were holding her down and in the same time performing a minor surgery on her.

The 90 miles sailing trip from Fuerteventura to Gran Canaries was really rough and I seriously doubt that Mickey and Seth will ever forget their first ocean sailing experience. We had winds up to 30 knots and seriously high waves that were beating the boat for almost 17 hours. I am amazed that no one threw up in his room.

Mickey told me that it felt like being in a warzone when she was down in their cabin trying to sleep.

I would be amazed if they ever would go on a sailing boat again after this “rough” experience but I hope that I am wrong. We really hope that we will see you again somewhere in the Caribbean. –We will really miss to hang out with you guys.

Gosia that is a really good sailor went on to her next adventure. She is now crewing on a big catamaran that is about to sail to the Caribbean.

-We wish you a safe and happy trip.