Among sharks, lizards and swimming pigs

Nor Bimini or Grand Bahamas made any impression on any of us; expensive, rude people, extremely touristy and we all got the feeling that if you did not have a green bracelet from one of the “all inclusive” hotels they hated you! You couldn’t even walk down to the beach without getting stopped by a security guard that in a rude way told you- this is private property! Do you stay at his hotel? Do you wanna buy a day pass? 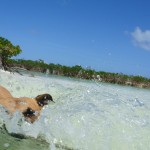 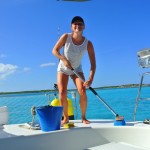 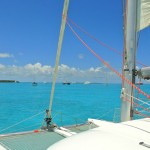 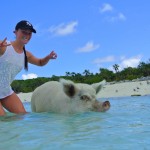 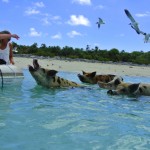 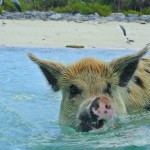 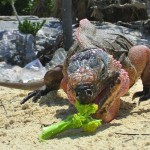 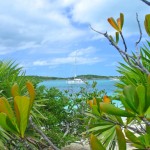 We did the best of the situation and we did of course have a good time regardless of all the rules and regulations on the island, but that was cause of the good company onboard the boat rather than of the place we where at. I would not recommend any sailor or traveler to visit Grand Bahama – just a waste of time

Our Alternator broke down and that was the reason we had to stay there for a full week. I was lucky that I bumped into an American guy called Jack, he works as a boat mechanic in Grand Bahamas sense 20 years and he helped me out to order a new alternator from Miami. As soon as it arrived we continued our trip down south-west to a group of islands called the Exumas.

The Exumas is and area south of the capital island Nassau and it contains of hundreds of small cays and islands. The water is crystal clear but also really shallow so you need to keep close attention so that you don’t sail into one of the many reefs surrounding the islands.

The underwater life around Exumas is really spectacular and we have seen everything from sharks, lobsters, crabs, turtles, rays, barracudas and even a couple of swimming pigs?! I think I have spent more time under surface than above during the last week.

We have done a lot of spearfishing during the last week and I must say we have been pretty successful; lobster, crab and many different kinds of tasteful fish.  To buy food around here is really expensive and the selection of food is very limited so we are grateful for whatever the sea can offer us. 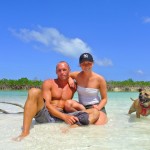 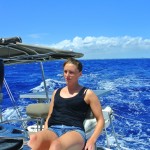 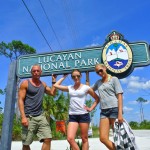 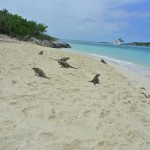 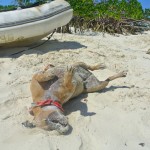 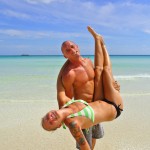 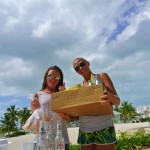 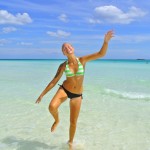 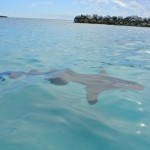 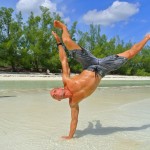 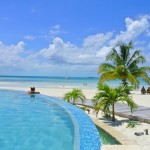 A couple of days ago we went into a small marina at Highbourne Cay. When we took the dingy into the marina we could see a sign that said- be aware of the sharks. First we thought it was a joke but when we looked under the boat we could see at least 8 nurse sharks swimming 30 centimeters under the boat!

Just next to Highbourne Cay you will find another even smaller island called Allens Cay. The islands will give you good protection regardless of wind direction and wind speed. We anchored up there for a night when the wind picked up and to our surprise we could see a lot of big lizards running around on the beach. Apparently this breed of Leguan Lizards only lives here on this specific island.  They were really used to people and they practically ate vegetables from our hands.

We are at this very moment anchored just outside an island called Staniel Cay. On the island you will find two small marinas, two tiny grocery stores and a restaurant.

Around the island you will not only find super duper clear water but also the famous cave Thuderball Grotto, swimming pigs, a sunken airplane and a lot of sharks and really big ray´s.

We did actually also dive into the cave when it was high tide. It was current as hell but well worth the effort!

Another cool thing that you will find around here is a small beach with BIG swimming PIGS! Imagine that you approach a beach with your boat and suddenly you see big fat pigs swimming around in the water!!

That’s all for now- have to get back into the water!

Some useful coordinates and information

Spare guns (harpoons) are not allowed in the Bahamas and they will confiscate them if you tell them that you have them onboard. You are allowed to hunt with a “sling spare gun” wish you can also buy here in the general stores.

The swimming pigs outside Staniel Cay