It was almost 6 months ago we visited Nuku Hiva for the first time. At that time we had to spend over 24 days on the Pacific ocean before we entered Taiohae bay- the main bay of Nuku Hiva. This time our travel-route was way less dramatic and we arrived after only 26 hours of sailing from the nearby island- Fatu Hiva. 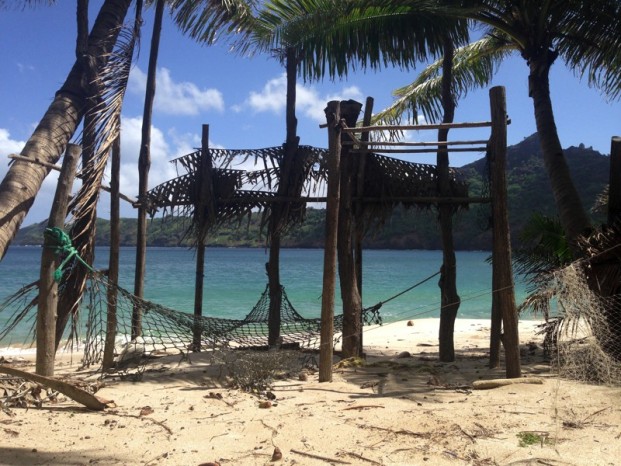 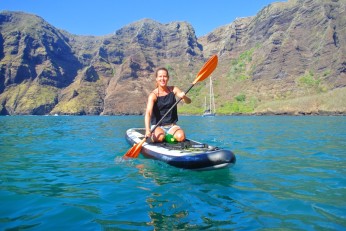 Sarah on the SUP in Daniel`s Bay 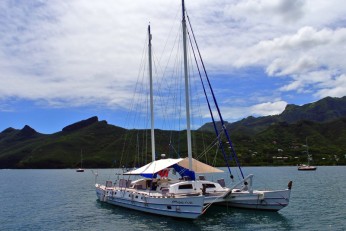 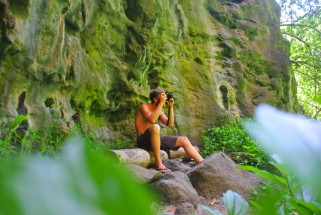 Jack on route towards the waterfall in Daniel´s Bay 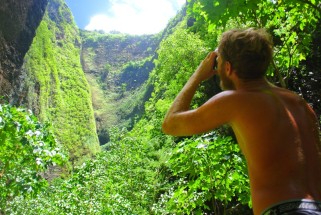 Looking over the waterfall valley 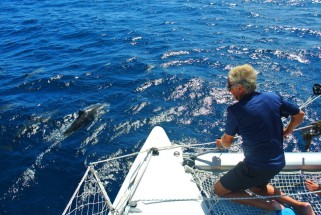 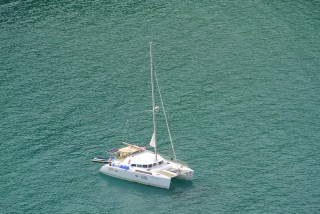 Bay Dreamer from above 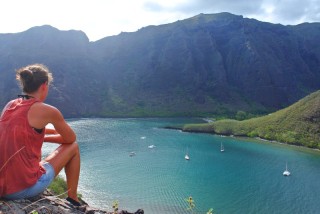 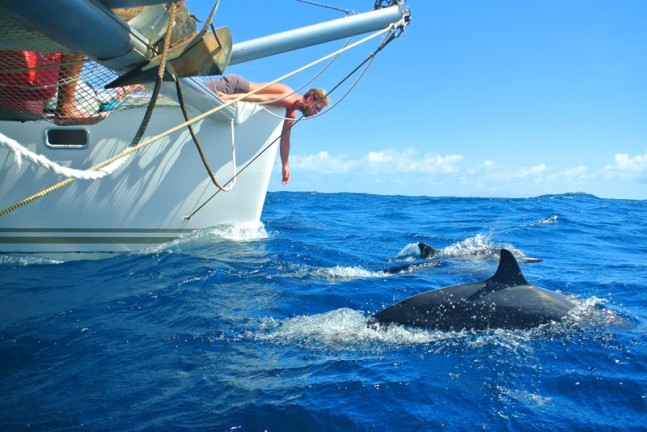 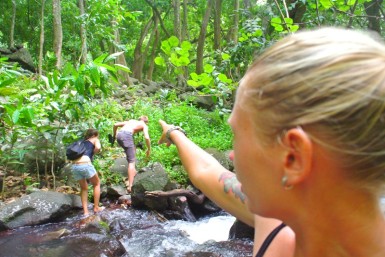 Anna navigating us trough the djungle 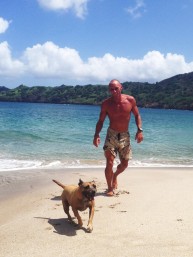 Daniel and vera in Anaho 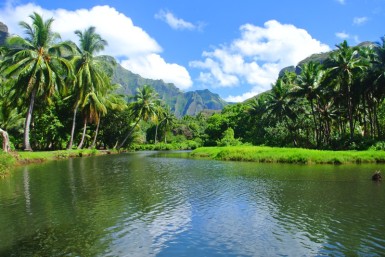 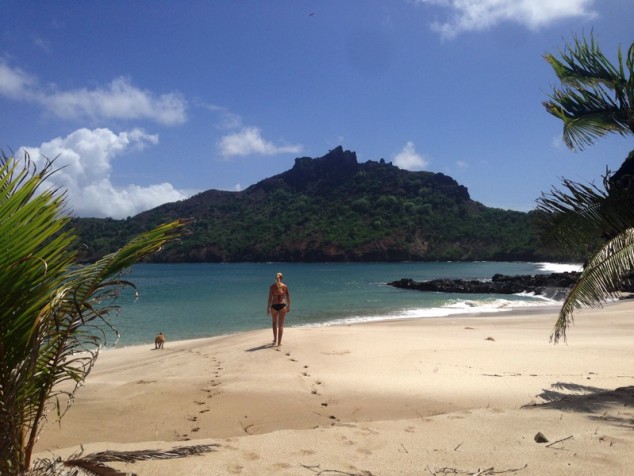 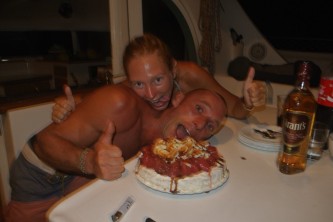 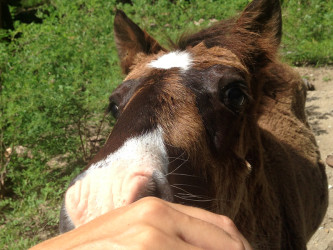 One of many horses around the Bay of Anaho

During our last stay on this Marquesas Island I spend most of my time inside our starboard engine room
, fixing our broken head gasket. I remember that our crew-members were telling me about this beautiful bay, just a couple of miles “down the road” that they spotted during a trekking to one of the highest waterfalls in the world (I don’t know where I heard this but I did).

This time my engines are running perfectly and my old crew was absolutely right! Daniel`s Bay or Hakatea Bay if you speak Marquesas is absolutely magical. The bay is extremely sheltered and the water is so still it almost feels like you anchored on top of a small lake. To get inside the lagoon you have to navigate in between two high mountains and well inside it feels like you entered a “Jurassic park-like” world.

Around the calm bay you will find a couple of small houses , fruit-plantations, horses and freshwater streams. The people living there is more than friendly and you will have a hard time passing trough the area without getting at least one bag full of fruit from one of the locals!

I am not even going to attempt to describe this place more in writing- my writing skills are just not good enough – you just have to believe me or our pictures when I say that this place is WORTH VISITING!

Besides Daniel`s bay we have also visited both the eastern and north-eastern side of the Island. If you go as far east you can on Nuku Hiva you will find a deep protected bay called Comptroller bay.

It´s not much to say about this place except that we saw a battalion of manta Rays cruising by us when we left the bay. I have never ever before seen that amount of Manta´s before in my life and if it was not for the “brownish” water in the bay I would definitely have gone into the water and checked them out more closely. I guess the river that works it ways trough the jungle colors the water with its muddy water and muddy water is scary waters if you ask me!!

Sarah and Jack are both getting the hang of sailing by now. With Jack as a captain and Sarah as a deckhand they sailed Bay Dreamer all by them self around Nuku Hiva`s eastern tip until we reached Anaho bay.

The bay is huge and the high peaks that surrounds it offers great shelter in all wind conditions. All around the bay you will find sandy beaches and they say that this bay basically holds the only coral reef in Marquesas. This place is also very high up on our “paradise-list”.

Me and Jack went for a 2 hour “mule-trail-run” that took us all the way up over the mountain and down to a village called Hatiheu placed along the coast in the next valley. I can’t say that I enjoyed that village because I was to exhausted but according to Jack this village was a “master-peace” when it comes to villages (apparently they had a volleyball net ???) (who cares?!).

During our little “hike” we literally stumbled upon at least 5 horses that was tied up in the strangest of places. One poor guy was tied up to a tree out in the middle of nowhere along the mule-trail!? Yes- horses do eat  mango’s!!!

Later on that night Jack went on his own little “away-mission” up on a nearby peak- check out his awesome pictures!! 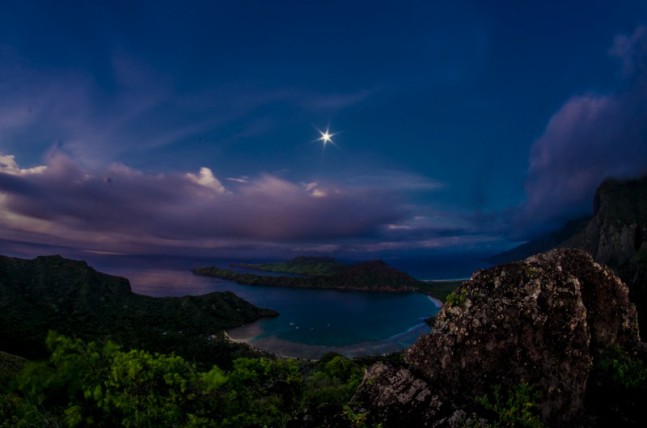 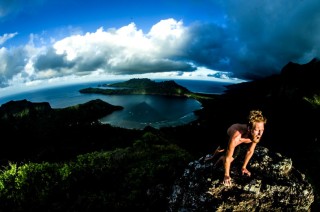 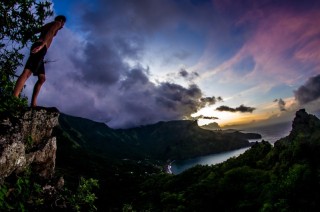 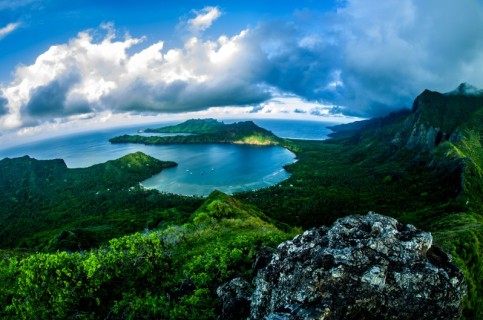 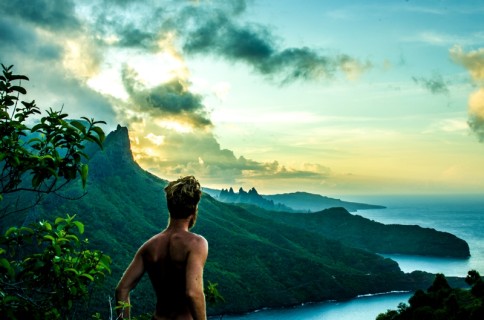 Jack up in the mountains in Nuku Hiva

Our Water-maker is running at 100% again

For the last couple of months our water maker has been running at half speed which has been a bit frustrating . This is now taken care of and our water maker is now fully serviced and running at full speed again!
If you ever arrive to French Polynesia and are experience problem with your water-maker or fridge for that matter, you should contact this french guy called Gilles. He is out sailing with his family/ workshop in French Polynesia sense a couple of years. He is very competent and also recommended mechanic by Spectra water makers.

Besides fixing our water maker we have also altered the drainage of our two front hatches, so that they are acting as water-collectors. I don’t understand why we waited almost 3 years until we made this genius little solution- we actually filled up over 150 liters during just one nights rainfall. Ok- it is not every night you will have that amount of rain but a little is a lot more than nothing- right??

Galen has left the building! Welcome back Sarah!

Galen that has been sailing with us for almost a month left the boat a couple days ago. He sailed with us all the way from Fakarava To Nuku Hiva via Hao and Fatu Hiva (1100 miles)- thank you Galen for everything and good luck on future adventures! Sarah that left the boat earlier in Fakarava is back on the boat again!

This super sweet Canadian girl decided to come back to us after being away for only 2,5 weeks!!! WELCOME BACK!!