My dear sister Felicia arrived to Santorini two days ago and she is now a member of the crew for the following week. She arrived in the middle of the night so we decided it was best if I met her at the airport (she is also afraid of the darkness). 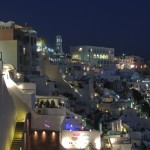 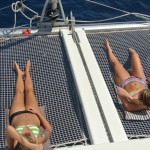 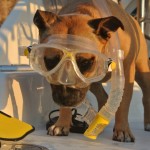 We where on anchor right outside the old port of Thira (wish is the main town on the island )and the plan was to pick up our new guest there but because of strong winds and bad anchorage we had to go back to OIA to pick her up.

I can tell that it sucks to be on anchor and having the feeling that you are going to end up on the shore mean while you sleeping. I sat the whole night staring in to the darkness so that I would be fast enough if the anchor lost its grip. After a couple of hours of staring the mind plays a lot of tricks and after a while I saw ghosts both in the water and on land- seriously I am 36 years of age- what’s wrong with me!

Yesterday we sailed to a volcano island called Kameni right outside Thira where we spend the night- it was really nice and the wine and the steaks didn’t do things worse.

We are now tied up in the old port of Thira again and this time we dived down and placed two anchors by hand to hold the boat, hopefully that will do the trick- the worst thing about doing that is if you have to leave in a hurry in the middle of the night you wont be able to pick them up without diving into the dark water- fuc.. that! – I wont let the white dead lady take me (a saw that in a movie 10 years ago- pretty scary stuff). I asked Vera if she could do that job if needed but she refused- she sad her mask was leaking!! – Stupid dog!

Tomorrow morning we will set sail for Crete- it´s a 80 mile sail and the winds are pretty weak- so it can take a while!!