Since almost 10 days we are on these beautiful green and lush Islands called Marquesas. 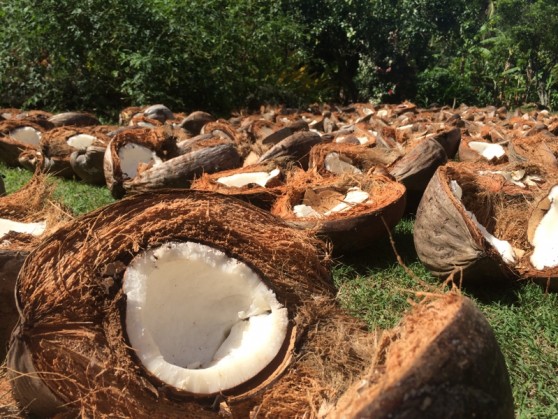 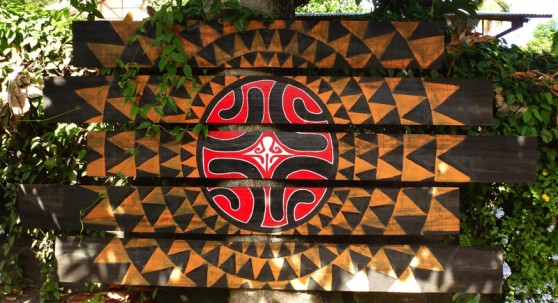 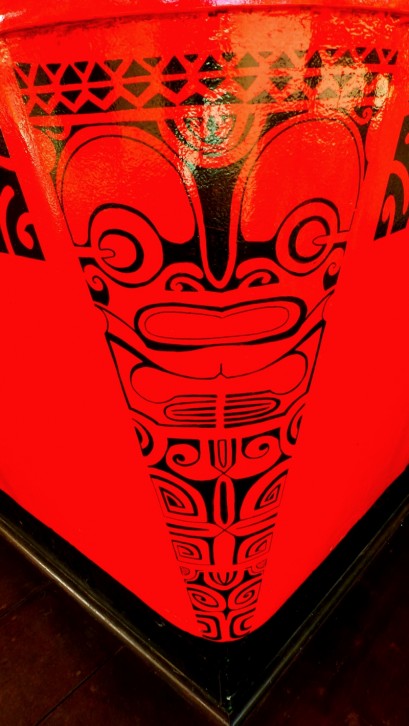 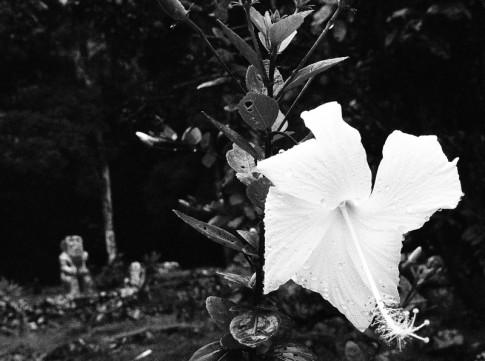 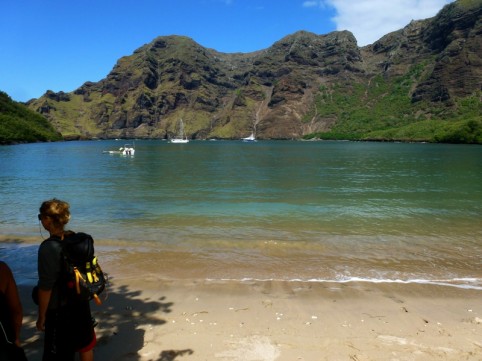 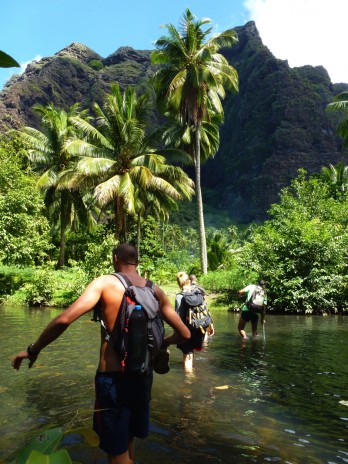 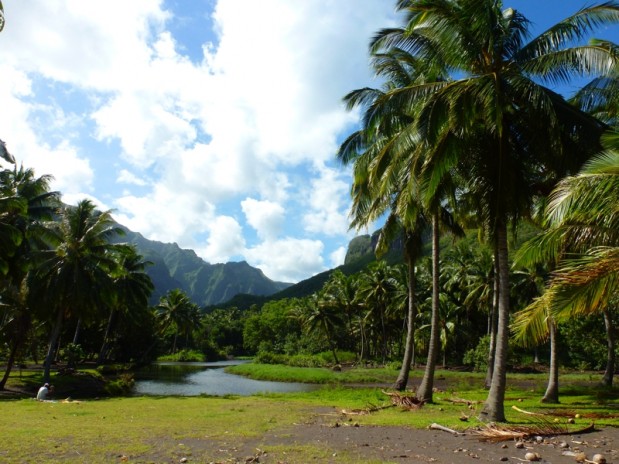 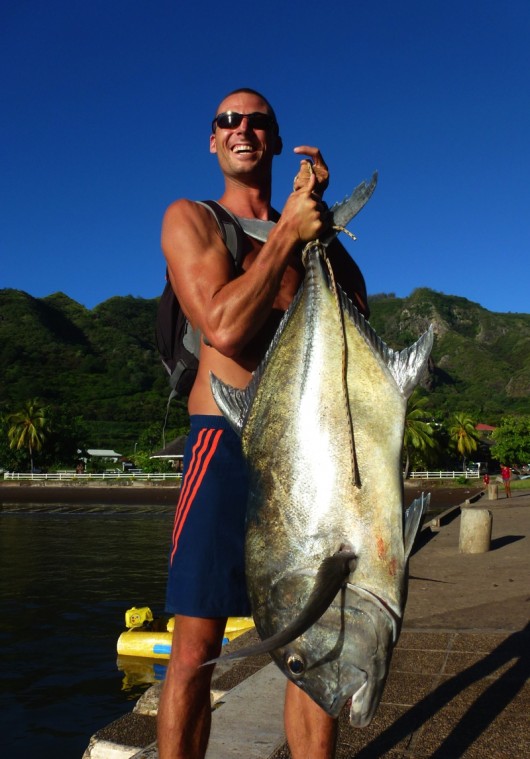 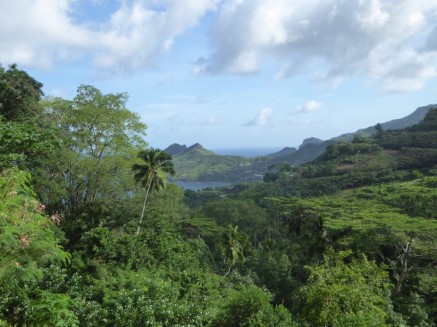 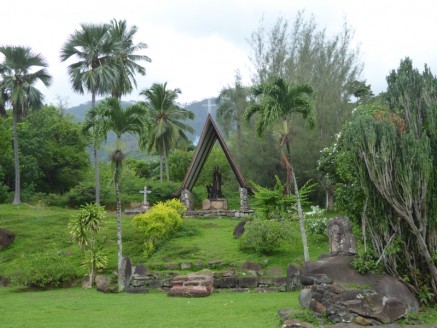 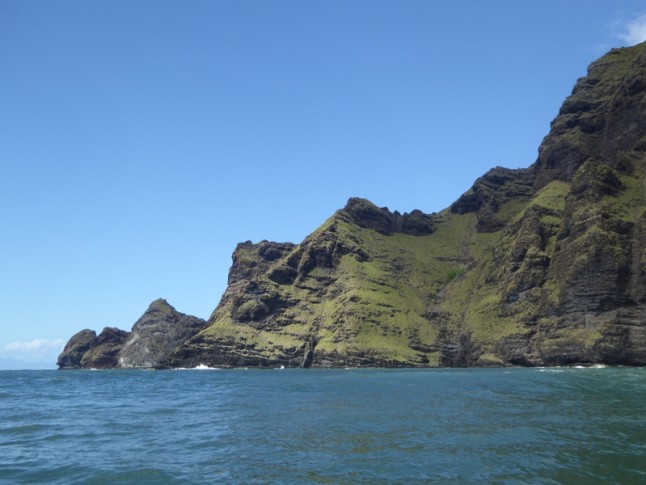 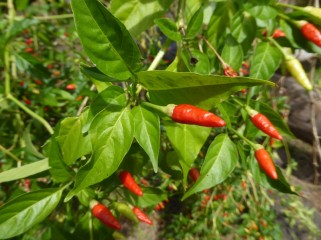 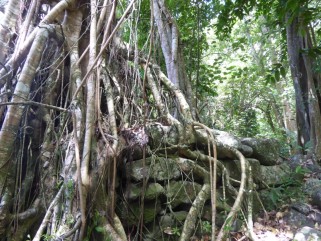 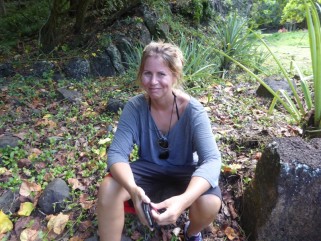 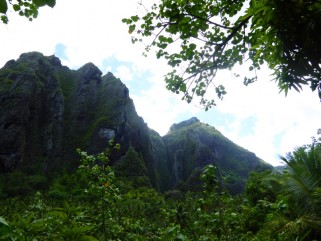 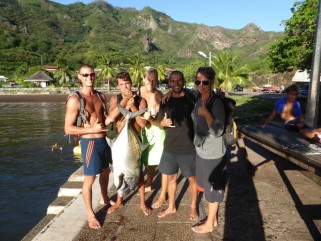 The crew in Hiva Hoa 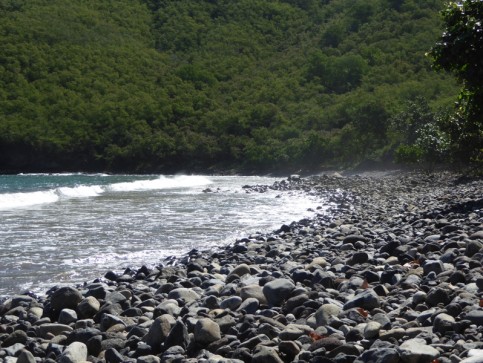 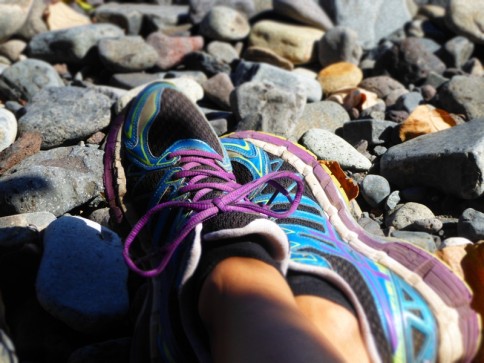 The history goes back to 500 a.c. when the first people stepped foot on land. One of the oldest and tallest Tiki’s are found here, dated back to 600 a.c.
The Marquesans had a rich and vivid culture with strict rules and customs. The Chiefs of the Clan for example where buried – bones only – in little coffins which they hoisted up to the steep, high cliffs surrounding their valley, with ropes made from banana leafs. Or they chose a big, old „Banju“ Tree, the one with the tallest roots and hoisted their bones up there, only priests where allowed to sleep at this holy place. They made fruit storage squares out of stones into the ground, where they kept fruits – with no skin – and treated with a special paste – eatable for up to 3 years. They had 77 different costumes and dances to make their Tiki God happy and of course the human sacrifices. But only the scull got crashed and the brains got eaten.

The same rule applied for the warriors who didnt survive the battle. You had to kill 5 of them to win the battle  –  and then they ate the Warriors brains to make themselves gain their strength and intelligence.

Medicine Men and  Tattoo Artists and Boat Builders were considered almost as important as the Chief Family. The Marquesans traveled as far as Peru with their 150m long Kanu’s sometimes containing a whole Clan with 100 people – and managed to sail back, introducing new fruits and vegetables.

Every Tattoo Symbol had a special meaning.

But then the French came !!!

And out of the estimated 80 000 people on Marquesas Island only 2000 survived. They tried to convert them into Catholics, forbid their dances, their tattoos and their tiki’s.. when they refused, the dying started – mainly due to the unknown diseases the French brought with them- like the Spanish Flue – but they blamed it on the disbelief in the Catholic Church, so they converted.

Up to now only little more is known about the culture and customs of these early marquesans because the people died young, the tattoos- which told story’s vanished, the Tiki’s got destroyed and even nowadays there is no history lesson in school about the Roots of these people.

The Tattoo Art got re-introduced from Samoa and  even if there are a few who really know about the symbols and their meanings, mostly the Tattoos are a nice decoration nowadays.

Ilearned all this from Terry our Tour Guide who took us to a very high – 350m but very tiny Waterfall in the Tahoa Valley,  so other people may tell different story’s.

On the boat ride to the valley we saw huge Manta Rays hunting for Plankton and on the way back we got a 20kg Black Jack on our hook J As we came ashore the local hunters just came back from their wild pig hunt- only the noses sticking out of the backpacks showed their existence. The 8 dogs, with cut tails and ears to make them look more dangerous,  got lifted out from the boat, the blood cleaned away from the floor and the raw goat meat packed in plastic bags . .

This sure is still a wild place!!!

Otherwise we struggle with the French language and with our engine… a very knowledgeable Finish Guy is helping us out with the repairs, after the parts arrived really quickly from Tahiti, but still the engine doesnt like to start, leaking Diesel now- instead of water.

We hope for the best – with the first light tomorrow – so we are able to set sail to the Tuamotus – where a second engine is dearly needed.