After spending 4 days on Tahiti the day we did the Lava Tube Tunnel Tour (short LTTT J ) was the most memorable. We got picked up at 8 in the morning by Vincent and his big Land rover, who drove us all the way to Hitia’a a small town on the other side of the island, far away from the traffic and busyness of Papeete. 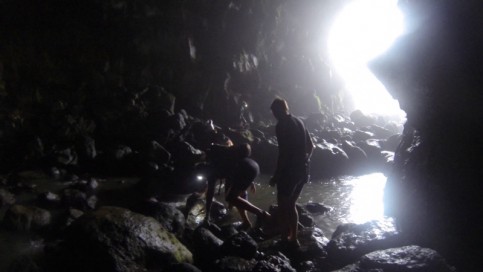 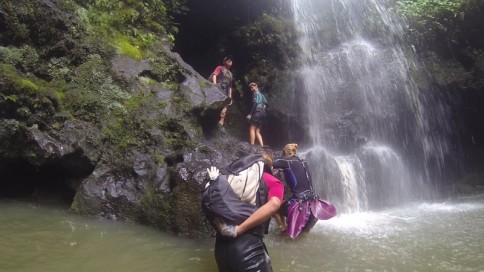 On their way into one of the caves 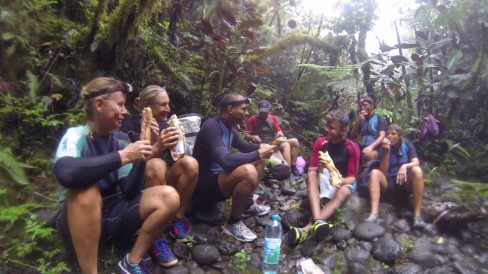 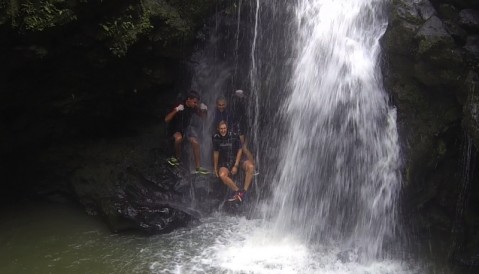 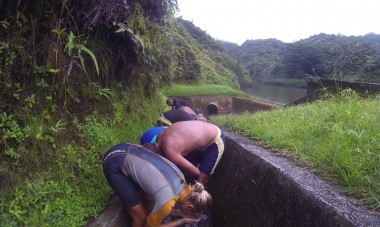 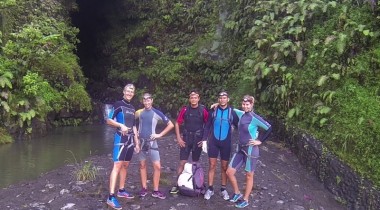 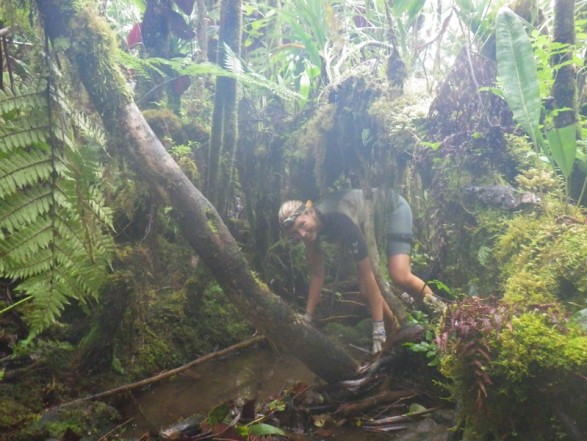 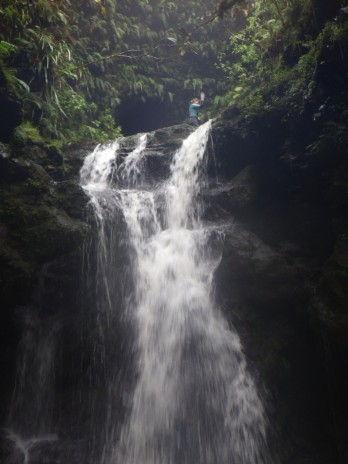 One of many waterfalls 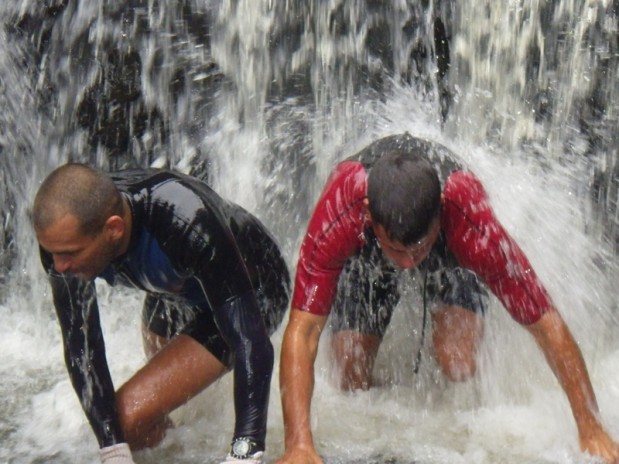 Victor and Simon getting wet

After we left the main road we drove for 40 min. on a dirt road up into the mountains, wild goats and pigs slowing our way – and – a flat tire. We reached a dam, parked the car and changed into our wetsuits. It felt really weird walking in a Shorty, with a head torch and a honest around your hips on a mountain trail – but the first tube and the river weren’t far.

We climbed up the first rock, rounded a second one, the light disappeared and jumped into the river water. Or to be more precise walked into it very very slowly, the water was freezing, we tried not to loose our balance with the backpacks above our heads and the water up to our chins. While questioning myself “Should I swim or walk?” my knee hit a stone under water while stumbling out, au !!

Soon we came out of the tube and into the second one, which was more an arch. And then the third tube appeared – Vincent said something about 1 ½ hours – but I didn’t pay enough attention, later I realized he was talking about the time inside !! We honestly spent 1 ½ hours INSIDE these pitch black tunnels, all the time we followed the river’s path, walked on the stones, or inside the water, climbed waterfalls, sometimes crawled on all fourth to get through a narrow part, no light, no sound, just the 6 of us and our head lights and our excited talking. The sound bounced back from the sometimes 15 meter high ceilings, which was covered with a special algae glowing golden.

Then we reached the waterfall.

We didn’t quit see it, because of all the water in the air – I think its called mist J – but we surely could hear it. We sat like chickens on the side of the wall, beneath us a black river. I wanted to jump, but Vincent wasn’t sure first – “ Not from there!! Come down closer, there is a stone somewhere there” pointing at the water, “but further in the middle it should be ok” .. so 1 – 2 – 3 IN I jumped into a black space beneath me !! I came up with a big smile and ready for more adventures.

We kept to the left and swam out of this big hall.

The tunnel grew smaller now, almost impossible to stand up. Have we been in here before?? Vincent said we are heading back and out – but I did not remember a single path, stone or rock !! Amazing !!

Then the black changed slowly into a soft grey color and around the next corner we stood outside in bright sunlight, still in the river, but a thick forest around us. No tree and bush bigger than 2 meters, every leaf and branch covered in moss.

We enjoyed our lunch at yet another beautiful waterfall and decided to walk back inside the forest. The path almost non existent, wet and slippery, we used our hands as legs (like all the hours before).

This finally brought all my Indiana Jones feelings back out again, I could have gone on forever, tru the mist and the clouds and this unreal forest, or even back into the tunnels for more exploration – until we almost stumbled into a electricity Pole. “What the f***!” I thought, like waking from a dream.

Thanks for the reminder – civilization!!

But it was an amazing trip – I believe this night we all fell asleep with a big smile, happy and exhausted – well at least I did J