Safe and sound in Cartagena, Colombia

First of all I want to thank my awesome crew that sailed with us from Cayman Island to Cartagena in Colombia. Ray, Andrea and Steve that was out trying their sea legs for their first time was in for a real treat. 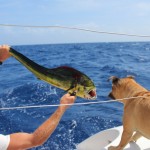 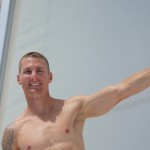 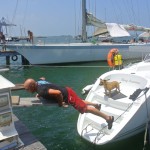 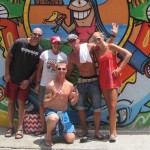 It was not a pleasant trip at all; we traveled more than 750 miles against the wind for more than 5 days. It really wears you out to fight the sea for such a long time. Seasickness, difficulty to sleep, hard to move around the boat is just a few of the downsides that comes with upwind sailing in rough conditions.

I salute my crew, my dog and the boat for being so strong out there- thank you guys (and boat).

Sometimes I find it hard to write and I just can´t find the words- this is one of those days so I will keep it short! So instead of killing myself with letters and wrong spellings I will post a letter that Andrea wrote to one of her daughters (with her permission of course).

Also Steve made a movie about the trip- and you know what they are saying- a picture says more than a thousand words!

Ok, 6 days at sea is a long, long, long time.  I have been sitting around on my hind end for the last 6 days because it is easier to sit than walk around the boat.  Right now we are about 6 miles away from Cartagena, Columbia.  We can see the lights of the city in the horizon and after this many days at sea, I am excited.  I’m not sure how I am going to walk on land after adjusting my style to a rocking boat.  I feel like one of those people who turn around in circles really fast and then tries to walk – or just got off the Tilt-a-Whirl at Lagoon.  Wobbly to say the least.

Our Captain has insisted on doing the dishes and has been very hospitable.  The food has been good – and yes I have eaten more beef and pork these last six days then in the last 11 years.  Boat cooking is tricky.  The Captain caught a Mauhi, Mauhi while sailing.  He reeled it in and it made a good lunch and dinner for the five of us.

Sleeping on the boat has really messed up my schedule.  I have been taking Dramamine to ward off motion sickness, but it’s really like a sedative.  If you combine that with the lack of activity, I have had a lot of rest.  That is during the day.  At night, while we are in the cabin – trying to sleep at the proper time, it sounds like the boat is banging and twitching all over the place.  It is really loud and the mattress and sheets move.  Then, on top of that there is the night watch.  We have all taken turns.  My shift was from 3:00am – 6:00am.  It was really nice because I got to see the sun rise over the Caribbean Sea almost every morning.  Some mornings were better because there were no clouds.

There are a lot of flying fish in the ocean.  They look like little birds franticly flying over the ocean.  I don’t think they are very smart.  One day a lone bird was flying over our boat and when we would scare up the flying fish, he would dive down for lunch.  On the downside, he pooped on me.  Yes!  Right in the middle of the Caribbean Sea, and the only bird for 100’s of miles pooped and it landed on me – what luck!  Anyway, a couple of flying fish flew into the boat during the night.  We used them as bait the next day.  I guess they are not very good bait, because we only caught one fish during the entire duration.

Well, I’ll write more later, hopefully I’ll be able to send this off to you so you know I haven’t been kidnapped by pirates – just pooped on by a sea bird.