Yesterday we decided to go on a “cave-hunting-mission”. Katrin did some reading on the Internet and found out that close to an Island called Barbeque Island it should be an underwater cave. The cave is according to this Internet site over 100 meter long and is supposedly leading under the reef and out to the open ocean- THE GAME IS ON. 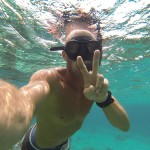 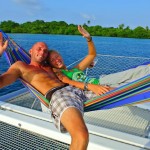 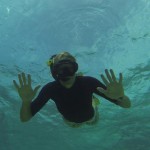 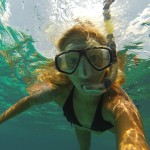 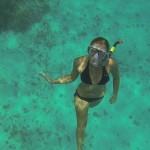 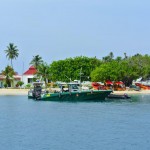 We left the Lemon Cays around 11 a clock in the morning, this time we used the northern channel on the western side. This entry/ exit was a lot easier than the others we tried out yesterday.

After a 4 hour slow sail we arrived to the Barbecue island, it is always a bit tricky when you arrive to a new place and have to navigate trough the reefs but we did good this time. Anna was in the front checking for shallow areas meanwhile Katrin was doing the map reading.

Three minutes after we dropped our anchor an Indian with his wife came out with their Canoe and asked for 10 dollars for the anchorage. He told us this is valid for a month and that we now have access to all the Islands in the area without paying for it. The old man was full of shit and we had to pay the Chief on the Barbecue Island 2 dollars per person anyway. I don’t really care about the money; it just pisses me of when people are funny!! The Barbecue Island is actually called Turtle Island nowadays.

We asked chief Azetes were we could find this Cave. He looked a bit funny but after a while he told us he know about one cave on the outer reef. Two minutes later another Indian showed up and told us he knew about a cave- but not on the outer reef.  They will both show us their caves tomorrow- maybe we will find many caves on this cave-hunting trip!

The Island was very nice and clean, also it is facing the big ocean and you will see the waves breaking constantly against the reef. We did a short snorkeling session just next to the Island. It was VERY current and we had to work pretty hard but it was well worth the effort. We saw many fishes, one lobster and also a nurse shark.

We left the Barbeque Island or Turtle island that it is actually called nowadays around 3 a clock. Before we left we went out with a local guy that told us he knew about some cave further out from the island (not the same cave we were looking for but still a cave) The mission got canceled cause of to big waves and we went back to Bay Dreamer after we did some snorkeling.

We motored just 0.5 nm to our next anchorage just outside an Island called UKUPSUIT. The entrance to this Island is seriously narrow; a guess would be around 12 meters between the reefs. We used two spotters in the front and Katrin as a map-reader while we entered ridiculously slow.

This morning Katrin, Esa and me took the dingy out for another try to find the cave. This time was also a big disappointment; we went on ground, got a wave into the dingy, water in the fuel tank, lost my GO-Pro (Esa found it later on).

At this very moment we are sailing downwind towards Provenir where we will do our “internal clearance” before we set of towards Portobelo. Esa and Heidi will leave the boat tomorrow morning and continue up north to LA in the USA.