The distance between the Society Islands and the Tuamotos is only 210 miles but even a very short distance can be unpleasant and take a very long time if you do the journey against the wind. This is why we had to wait around in Raiatea for a while before we got ourself a “wind-window” that allowed us to set sail and proceed towards our next destination- an atoll called Tikihau. 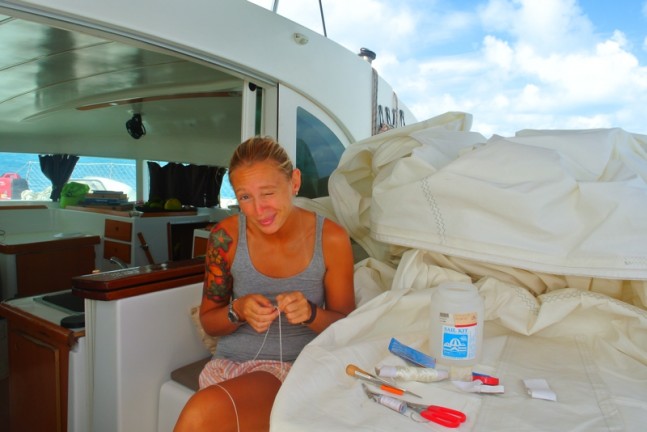 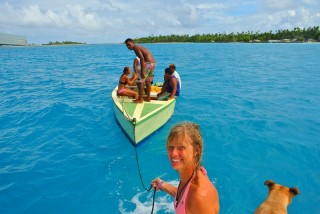 Lena together with the local fishermen 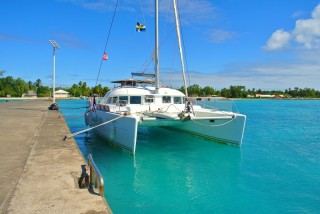 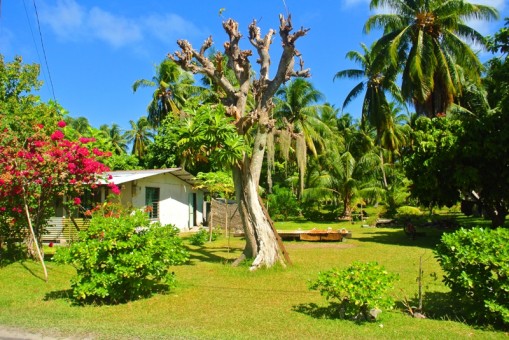 One of many pretty gardens on Tikihau 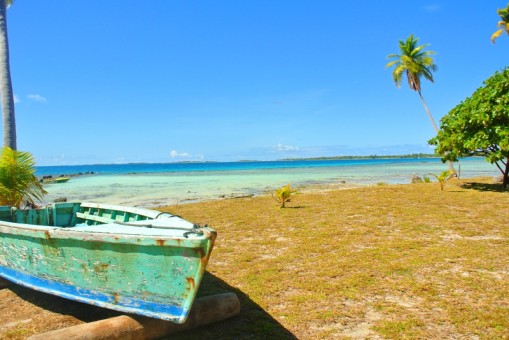 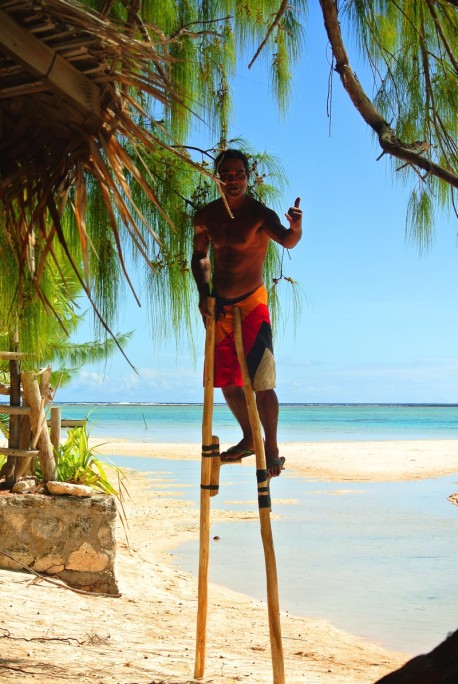 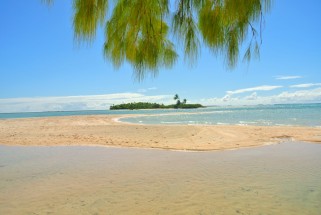 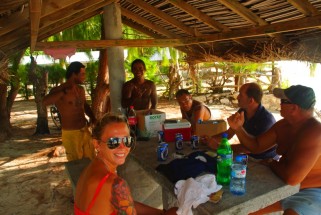 A couple of guys Anna & me hung out with 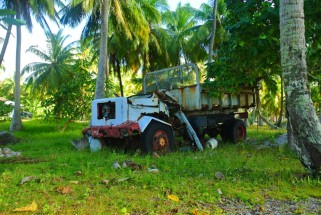 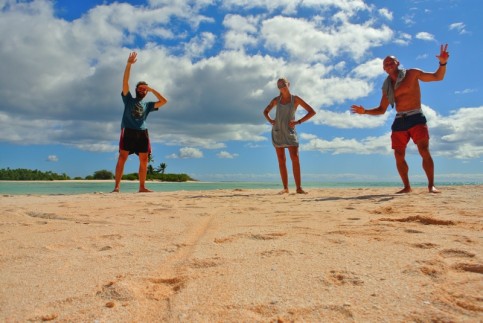 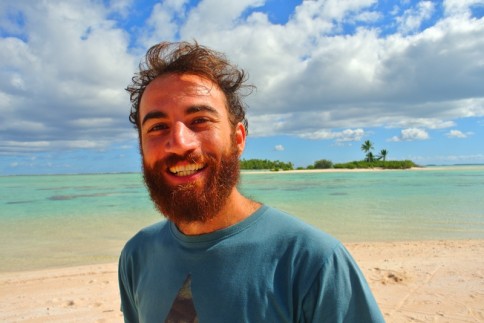 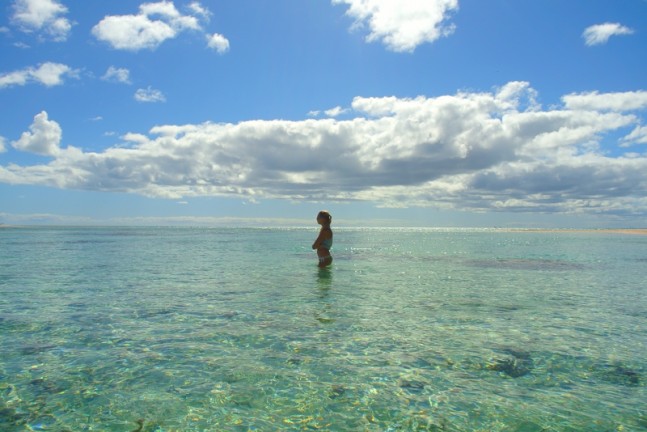 Anna out in the blue 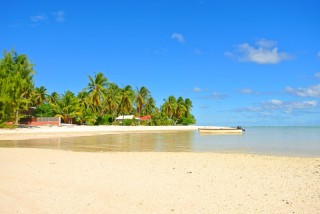 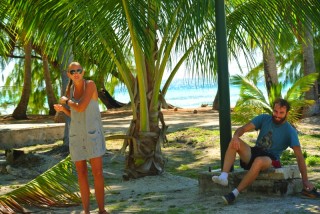 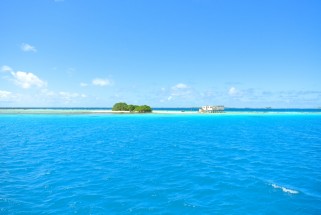 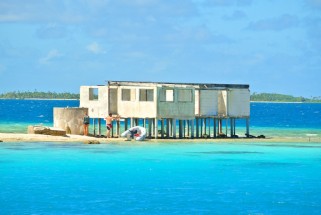 An abandon building out on a small island 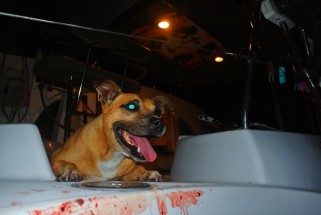 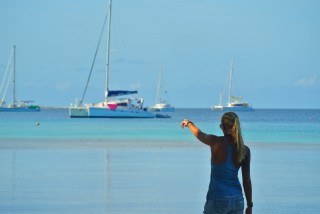 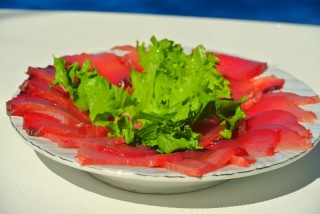 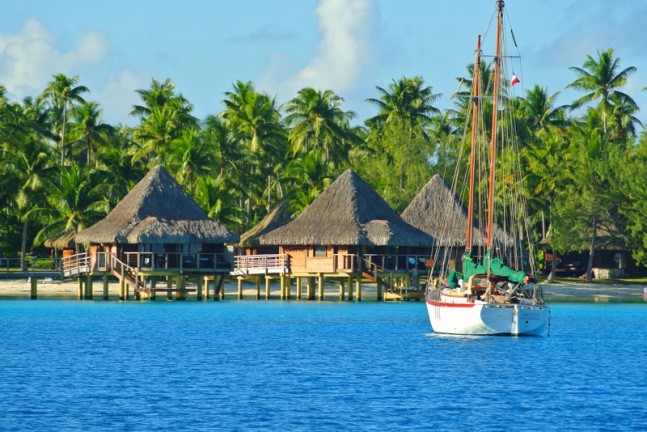 our breakfast view in Rangiroa A paddling competition during the Heiva

We knew that this window was very small and we had only two days to reach Tikehau before we would encounter bad weather together with strong winds. We did perfect and we arrived to the passage of Tikehau just at the time the current should be ingoing and before the weather turned ugly.

Imagine this; bad weather coming in, you are in the middle of the pacific, you are 180 meters from protected waters and then the bloody current is constant outgoing with speeds above 7 knots and you can’t get in! I had no idea that the current could be constantly outgoing for several days. Apparently this can happen when the atoll is getting flooded cause of strong winds and big waves for several days!

“Man I got frustrated when Bay Dreamer was moving backwards at a speed of 0.6 knots in the middle of the pass even though we were pushing both engines above max. After two failed attempts we had to give up and look into other options.”

What to do? We couldn’t get in and to stay on anchor outside was far from an optimum solution. We made the decision to sail further east against the wind to the next atoll so that we could try to get in there instead. The trip was only 40 miles and regardless of bad weather we should be able to reach Rangiroa in under 15 hours.

Around 2 a clock in the night the wind picked up to over 40 knots and we decided to make our already small sail even smaller. While reefing we managed to damage our mainsail pretty bad and we lost all our upwind capacity together with the damaged sail. We did a ridicules attempt to proceed with the front-sail and our two engines but it turned out to be nothing more than a failure and we had to turn the boat around.

We sailed down-wind back to Tikehau and the pass were we a couple of hours earlier failed to get trough. In the name of “emergency” we “stole” one of the local dive companies dive moorings and we ended up spending 2 whole days just outside the pass until we managed to get trough!

Anna and me spend the following day repairing the damaged sail meanwhile our crew checked out a nearby island. We did a pretty ugly but strong repair hat hopefully will hold for a while. The small beautiful island was habituated by a couple of fishermen that later on that day went “fish-picking” together with Lena and Pia at one of the many fish farms you will find around the island.  Later on that night we could all enjoy “Fresh Barracuda a´la Lena” – thanks a lot for that!!

Because of strong winds and choppy seas inside the lagoon we spend most of our time on Tikehau around the main village. The village was very pretty with small garden houses, beaches and palm-trees all over the place.  The main village on Tikehau has fairly big concrete dock that is mainly used by the cargo ship that visits the island on a weekly basis. We were allowed to tie up there free of charge and it  offered us good shelter from the choppy sea caused by the strong winds.

All around French Polynesia this time of the year they have the annual music and dancing festival called the “Heiva”. Even a small place such as Tikehau had their own little festival. Locals were showing-of and danced to traditional tunes played on drums and ukuleles.

Georgious from Greece that travelled with us from Bora Bora left the boat in Tikehau and continued his travels east to the Easter Islands by airplane. During his time onboard  I have advanced from being a very bad chess player to a less bad chess player and besides making me a less bad chess-player he has also answered 200.000 questions about space, black wholes and  time-traveling (he is a astro-physesist) – thank you for putting up with me and all my questions 🙂

To put several strangers on a small boat like ours is truly a social experiment and it will put everyones social skills on a test. This time the experiment failed and our two guests from Sweden decided to leave the boat after 6 weeks of sailing together with us. It was an awful feeling to not be able to make everyone happy onboard but we hope that their remanning stay in French Polynesia will be awesome!

Good luck to you girls and thank you for your time onboard!

Cruising under the stars

Sailing by night can sometimes be magic if the conditions are right. Me and Anna had one of those nights during our sail to Rangiroa the other night. A dark moon together with no clouds gave us a spectacular sky with a million bright stars above our heads- beautiful!!

Just 2 hours after we cleared the pass in Tikihau we could hear Vera barking and we got ourself a fairly big yellowfin-tuna on the hook! It was a mess to take care of all the meat in the darkness and Bay Dreamer looked like a “horror-movie-boat”  with blood all over her. The only one that truly appreciated this mess was Vera that gladly helped out with the deck-cleaning afterwards.

We had to tack a couple of times but with a windspeed of 15 knots together with small waves we were moving pretty fast trough the night and we could even treat ourself a couple of hours of sleep on the sea. Because we wanted daylight when we sailed trough the pass on Tikihau we had to leave a little bit earlier than the distance required. We made sure we ended up 8 miles north of our target very early in the morning, so that we could drift with a minimal frontsail for a couple of hours meanwhile we were waiting for the current to be optimal in the Rangiroa passage.

We are at this writing moment on anchor under the sun in crystal clear waters just next to Rangiroa’s eastern pass with a fridge full of yellowfin-tuna, I have been in worse situations!!